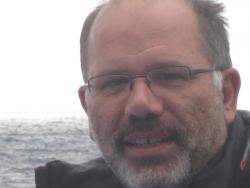 Greg Spiliopoulos is a Ph.D. candidate in Mathematics Education at the Kapodistrian University of Athens, Greece. He holds a Master’s Degree in Mathematics from the University of Kansas, USA, and a BSc. in Mathematics from the Kapodistrian University of Athens, Greece. He has served as a teaching and research assistant at both Universities and was a Landis-Mitchell Fellow at Kansas University. He has been teaching Mathematics, Statistics, Operations Research and Data Analysis Methods since 1994. He has worked as a Consultant in “Group Dymamique Co.” and as a Headmaster at the Montessori School of Athens “Maria Goudeli”. His research work has been published in Fundamenta Mathematicae (Mathematics Institute of the Polish Academy of Sciences) and in the Canadian Mathematical Bulletin. He is a member of the Laboratory of Epistemology & Science Education at the University of Athens. He is also a founding member of the Hellenic Society of History, Philosophy and Didactics of Sciences, of the Society for the Study of Greek Civilization.